Back to all News

Why LPAs Have Replaced EPAs – April 2015 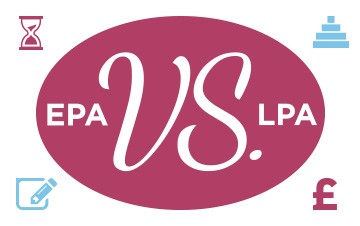 LPAs have replaced EPAs and now only EPAs signed before 1st October 2007 can be registered. So why should you replace your existing EPA with an LPA? We look into a most concerning case study:

Mr C signed an Enduring Power of Attorney (EPA) in 2005 with his partner of over 30 years as his sole attorney – both Mr C and his partner were widowed.  In May of 2014 it was decided to register the EPA, as Mr C had lost capacity.

As is required with the Registration of an EPA, his four surviving siblings were notified and they were given six weeks to raise any objections. Two objections were received from two of the siblings but they did not follow up and qualify with any justifiable reasons.

At this point it was reasonable to expect that the document would move forward to registration without further delay. However in August 2014 the Office of the Public Guardian (OPG) insisted that they visit Mr C, who by this time was in hospital and due to be transferred to a care home. The visit eventually took place and it was expected again that registration would follow. The case was then passed from the OPG to the Court of Protection with a request to register.

The Court of Protection then wrote to the siblings giving them another three weeks to raise any valid objection to registering. They failed to do so which allowed the matter to be presented to the next available Judge.

Mr C sadly passed away in December, three weeks prior to the EPA finally being registered. This course of events took place despite the continuous follow up by a professional representative on behalf of Mr C and his Attorney.

It’s also important to note that an existing EPA cannot be altered in any way, If changes are required it must be replaced with an LPA.

With LPAs there is no requirement to inform any relations other than those involved as attorneys but EPA registration is more complicated. To avoid complications at the most crucial of times, should you have an EPA (which was a relatively inexpensive document to acquire) LPAs should be drawn up to replace an EPA.

EPAs cover only Property and Financial Affairs. HEALTH & WELFARE matters are not included in an EPA. This is probably the most important of the changes and is a major reason for reviewing your power of attorney documents.

Find out how we can help...